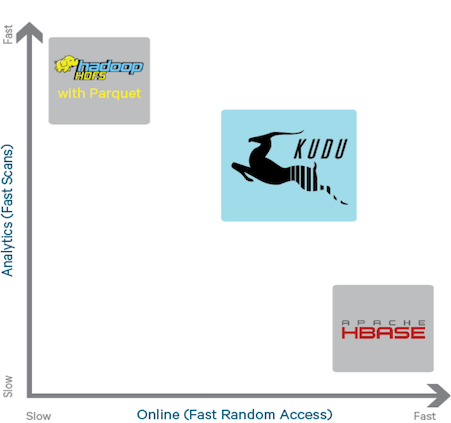 The big data landscape was until 1-3 years ago dominated by several storage systems, the first was Hadoop HDFS and later followed by Apache HBase, a NoSQL database. HDFS is great for high-speed writes and scans while the latter is well suited for random-access queries. A new storage engine, Apache Kudu tries to bridge the gap between those two uses cases.  Apache Kudu is a distributed, columnar database for structured, real-time data. Because Kudu has a schema, it is only suited for structured data, contrary to HBase which is schemaless. The data model resembles that of more traditional databases such as SybaseIQ or SAP Hana which uses columnar storage, that makes it well suited for OLAP queries. It is not an in-memory database such as SAP Hana, but uses persistent memory integrated in the block cache.

Because Apache Kudu allows both fast scan and random access, a big data architecture can be much simplified to address any analytics and business intelligence use case.  Kudu enables the use of the same storage engine for large scale batch jobs and complex data processing jobs that require fast random access and updates. As a result, applications that require both batch as well as real-time data processing capabilities can use Kudu for both types of workloads.